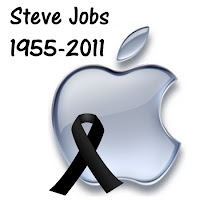 It feels somehow strange writing about somebody I never met in person but that had a substantial influence in my professional career and on my personal and family's life.

Sure, we all knew that Steve Jobs was going through a challenging fight and his resignation as CEO of Apple, Inc. was a clear signal that his health was rapidly deteriorating.

But many of us always wished for the iGenius to stay with us for much longer.

After reading some of the many testimonies, anecdotes, histories and messages when I learned about the sad news of Steve passing away, I started reflecting how much he influenced me and my family, and changed our habits and lifestyle forever.

I was about half way through of my career in electronics at a technical school when Steve Jobs and Steve Wozniak founded Apple. I was already fascinated by digital electronics and microprocessors crunching code for a Motorola MC6800, entering every byte by hand on a hexadecimal keypad. In those days programming was kind of and art of black magic and 512 bytes of RAM were a lot!!. I didn't pay much attention to Apple until they launched the Apple II, which at that time I couldn't afford but loved the design and how they put it together.

It took me a long time to have the first Apple product in my hands, and old Powerbook laptop with the trackball, provided by the company I was working at that time. I really liked MAC OS, it was simple, intuitive, easy to use and reliable. I really regretted when Steve Jobs left Apple, while they continued to develop some interesting products, they lacked the WOW factor that Steve was so good to inject on them.

Meanwhile Steve was getting busy at Pixar and NeXT, Inc. About that time I was already deep into Unix and drooling to have a workstation with a Graphic User Interface, so I started following very closely what NeXT was doing in hardware and their NeXTSTEP operating system derived from Unix. After establishing the first international connection to Internet for Argentina via SURANet, in 1991 I had the opportunity to visit Glenn Ricart who was in charge of the Computer Science department of the University of Maryland and Principal Investigator at SURANet. It was a great visit, when we arrived at his home where he invited me to stay, I almost had a heart attack when I saw he had a NeXT computer on his home office !!! What a marvelous piece of hardware, the animated GUI was fantastic, the resolution of the screen, even black and white was formidable, and best of all, it was running Unix !!. So bad that commercially was a product that was way ahead of its time and to expensive to grab market share trying to compete with PCs and the other jewels of that age from Sun Microsystems. 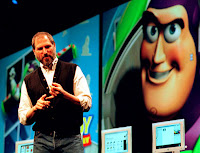 What about Pixar?. If you didn't like Toy Story you are from another planet. Besides the history that was entertaining not just for the kiddos, the technology and creativity behind it was amazing.
Even at the end of the movies, one of my favorite things from Pixar, this original idea of adding bloopers for an animated film. Did you cry with Toy Story 3 ? 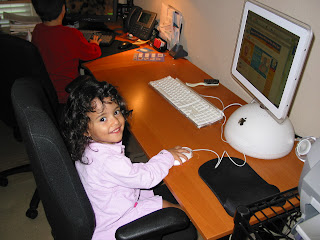 And then he got back to Apple, the iMac was born and NeXTSTEP mutated into Darwin and then on MAC OS X. Now with a good paying good and anxiously to have an iMAC I got my first generation iPod and the half dome iMac G4, which became our family preferred tool for managing pictures and videos. It later became the machine my daughter Veronica, not yet three years old, learned how to use a computer.
It was a lot of fun for her and also for my son (he is on the right on a Windows PC, bummer), MAC OS X was so intuitive and easy to use that they didn't have any problems using it. 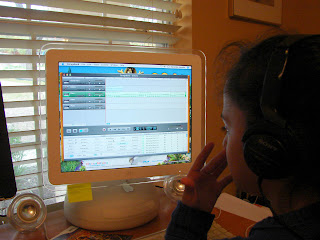 Veronica always enjoyed using this computer, that we still have and still works. Five years later and few MAC OS X upgrades and she is having fun creating her own music with Garage Band.

Meanwhile I was listening to other music on my first generation iPod, which later got company of the first iPod Nano I purchased for my wife to avoid getting mine hijacked.

And then came the new iPod classic, my home office got the new iMac G5, and the iPod touch. When I purchased my first iPod Touch I was blown away, I did like it as a music player but much more as a small portable computer. I quickly installed ssh to have remote access to my Linux servers, and later the new generation with camera and Face Time, I was feeling part of the Space 1999 crew with an improved Commlock on my hands.

I truly believe that being able to run so many applications on the iPod Touch (currently I've more than 150 installed), particularly the Apps for Twitter, Facebook, etc., got me more involved in Social Networking. My son has his own iPod Touch and it is almost an extension of his body, it is his preferred gaming platform, his window for searching on the Internet (parental proxy in the middle) about subjects he is reading, news and school homework, and sometimes he also listen to music, including the Beatles !!

My wife loves Angry Birds and some other games like Glass Tower, several nights I went to bed to find her sleeping with the iPod on her hand with angry birds flying around.

With the iPod and iTunes I enjoy much more buying and listening to music, what a great deal being able to buy the track I like and not an entire album with songs I don't like, the music industry had it wrong, Steve Jobs was way ahead of the curve.

We don't have iPhones yet, not because of Apple, just because we are tied to our existing phone contract and I'm not willing to pay the exorbitant rates phone companies pretend for the data services. We are planning in the near future to add an iPad to our collection of iDevices, it will be a great tool for my wife to have her portfolio and presentations of her work and classes on an iPad.

We got sad when we heard the news, but my eyes got really wet when I saw this video of "The Woz" talking about his friend and partner.

So how much Steve Jobs and Apple have impacted our lives ?

Much more than I expected and ever thought, he was truly a visionary, a doer of things that never being done before, a true believer of "Think Different", a genius.

“Your time is limited, so don’t waste it living someone else’s life. Don’t be trapped by dogma — which is living with the results of other people’s thinking. Don’t let the noise of others’ opinions drown out your own inner voice. And most important, have the courage to follow your heart and intuition. They somehow already know what you truly want to become. Everything else is secondary.”

So long Steve Jobs, God Speed and Rest In Peace, God bless your soul and your family and friends, you will be missed and remembered.