When I worked in large scale networking, to have a clear understanding and view of the overall network architecture it was always helpful, and in my opinion a very good practice, to put together high level topology maps, just a simple graph showing how each of the most relevant nodes in the network were physically and/or virtually connected to each other.
Visualization is a very powerful tool when you have to deal with a complex and large number of "relationships", it helps by giving you a graphical representation on how those relationships are interrelated and in which sections of the graph you need to increase or sometimes decrease the number of connections, it also helps to identify single points of failure or choking points, and drives one to make better decisions.
With the advent of the new social and professional contact network online services, such as LinkedIn, managing your contacts and how them become part of your relationships universe became much easier. I often had to dig into my memory to find where I met this person or how we got to know each other, and if by any chance her or him knows somebody else I know or I'm interested to know.
Yesterday LinkedIn posted on their blog How to Visualize your LinkedIn network with InMaps, it sounded pretty interesting and it looked very cool, so I gave it a try .... here is my InMap 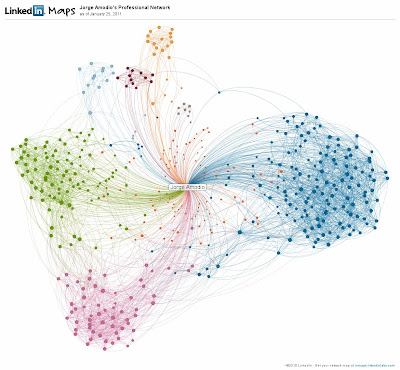 Nice !! At first glance it's clear that my contacts at LinkedIn are segmented into groups with a little bit of clustering and some lines between groups.
But if you take a closer look, you will notice on the top a group of contacts in orange which represent very interesting people from the Social Media arena that I met in a recent past. This group of people obviously today rely a lot on Internet applications like Twitter, Facebook, LinkedIn, blogs, etc, to build relationships and communicate, but the map shows something very clear, from the ones that I know and are in my contacts list, there are almost no relationships with my contacts in blue (heavy honchos of IT and Telecom) or in pink (Internet development and policy making).
This means that I've a huge potential to serve as a bridge between my Social Media contacts and the other two groups.
By knowing in advance a little bit of what is on each side of the bridge I may now be able to identify common matters that may help to have better representation of Social Media in Internet policy development forums, and have this particular group get to know more about Internet infrastructure.
The power of information it is not just collecting mountains of it, but how you mine, digest, represent,and visualize it, in this case literally "connecting the dots" to help you make more informed and effective decisions.
If you are a LinkedIn user with at least 50 contacts give it a try.
Nice job LinkedIn ... two thumbs up !!
Cheers
Jorge
Posted by Jorge Amodio