I've heard in the past the use of the word tweetup, one of my preferred definitions for it is the organized or impromptu gathering of Twitter users. I always thought about it as a bunch of kids coordinating via twitter where to hang out on a given night.
There is no doubt that many of the Social Networking tools that take advantage of the reach and ubiquity of the Internet have changed how we establish and develop new relationships and how we let others know more about us (in some cases much more than we want or think we are making public, thanks to lax privacy settings).
Many years ago I joined LinkedIn, I thought it was a good tool to keep all contacts in a single place and keep them updated, so if Joe goes to work for another company or moves to Mars I'll have (if he lets me) the latest contact info and updates about his whereabouts.
I don't remember exactly when I created my Facebook and Twitter accounts, but lets say it was more than two years ago, initially I didn't care to search for friends or old colleagues and classmates, it was until like a year later that I started to follow some folks in twitter and get annoyed by the constant updates, quizzes and stupid games in Facebook.
At the beginning I found that twitter was very disruptive, it took me a while (and I've been dealing with email since the early 80's) to control the habit to check email every few minutes and now I've got this little bird chirping every few seconds. But at some moment there was an inflection point, and that was when I installed the Seismic Twitter App on an Apple iPod touch. I was already using the iPod touch to keep an eye on email and as a last recourse ssh terminal, ohhh yes and to listen to music. But now with the twitter app I was able to read and send tweets when I was not at my desktop working, even on the road when I was able to get WiFi access (I'm not an SMS kind of guy and texting from a regular cellphone keypad is a pain in the neck), then I started following people and being followed. 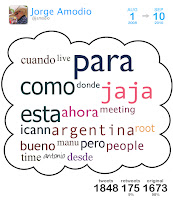 I don't take twitter as a very serious communication channel, so I may once in a while tweet a brain fart, some ironic joke or acidic comment, but also share a good laugh with local and remote friends and family.
I'm not anti-social but in many situations I've to pass the shy-geek threshold to become social, my wife keeps telling me that I need to socialize more and get out of my cave (office) and meet new people.
One event that got me very excited and ready to get out of the cave is that on October 16 we'll have in San Antonio our first edition of TEDx, then I was exchanging few tweets and emails with Rob La Gesse (@kr8tr) who works at Rackspace which is one of the major sponsors for TEDx San Antonio. Rob mentioned that Robert Scoble (@Scobleizer) was going to be in town and that they were planning a tweetup for Friday night (October 8, 2010).
Being one of the most active technology bloggers and noise makers, I've been following Scobleizer for a while, I thought that may be interesting to meet this guy who happens to have over 143,000 followers in twitter and became sort of a tech social media celebrity.
Rob mentioned that also Rocky Barbanica (@RocmanUSA) who has been Robert's producer for long time was going to be at the tweetup and many other interesting people, both Robert and Rocky now work for Rob at Rackspace and they are the major driving force behind a project called Building 43. Rob's primary mission at Rackspace is to help customers and startup companies even if they are not Rackspace's customers, and seems that they give him a great deal of slack to do whatever he thinks must be done to follow that mission.
Then I received the invitation and discovered another service (twtvite.com) that I didn't have a clue it existed, and showing what other twitter users where planning to assist.
At this time my shy-geek threshold was blown away and I was more than ready to show up at the tweetup. I was feeling like in my old days of ham radio amateur operator going to a hamfest or radio club gathering.
I arrived few minutes earlier and Robert Scoble, Rocky, Bruce Hughes (@jbhughes), and few others were waiting for some snack food and sharing beers, soon after Rob arrived and we started talking, it was almost instantly that I realized that the "Helping Startups mission" was no BS, and my shyness was totally gone and started talking about what I've been doing and I'm doing now (which involves a very exciting startup project of which I'll write something in the near future), we talked about technology, company funding, beer, food, later Chip (@ChipLaFleur) arrived who just moved into San Antonio from Michigan, then others started to show up, like Jennifer Navarrete (@epodcaster) who is sort of Lady Podcasting in San Antonio, and a very avid Camp organizer.


For a moment I was teasing Matthew Egan (@ImageFreedom) about SEO (Search Engine Optimization), he does SEO Consulting and I always found those SPAM emails offering that type of service very annoying, but talking with him and also with Ryan Kelly (@pearanalytics) from Pear Analytics I realized that some of these folks take it very seriously and it is not only a question of having a better placement on search engines than having a better and more reliable website for your customers or followers.


Everything went so fast, it was not a very large group but the conversations were so interesting that time was flying much faster than I expected, and then I met Nan Palmero (@nanpalmero), what a great and energetic guy, and since he was born in Uruguay across the river from Buenos Aires where I was born we increased the transfer speed of the conversation switching between spanish and english, he  is one of the officers of TheBMPR another social media community oriented to business, media and public relations.


Didn't have much time to take more pictures, I think Jen took some, but couldn't resist to at least have one with the big guy that even when he is getting bombarded with updates from more than 23,000 people he is following, he can put aside his iPhone and have a great conversation with you.
Thanks again Rob for the invitation and for making it happen, and even when tweetups normally don't need or have big sponsors, thanks Rackspace for let them make it happen. And obviously a big thanks to all that participated, it was a real pleasure to meet all of you and have a chance to socialize out of the cave.


It was a fantastic experience and now I'm looking forward to the next one.