The Next Billion Internet Users

On April 29, I had the chance to watch remotely some of the presentations and panels during the INET Washington DC Conference organized by the friends of the Internet Society Chapter in DC.

The main theme of the conference was "Internet 2020: The Next Billion Users".
The agenda was packed with interesting presentations and discussion panels that went beyond just the technologies associated with Internet and telecommunications in general. There was a lot of talking about policies, regulations, politics and a vast array of issues that have substantial influence in the evolution of the network and how fast it gets more users.
Lot of juicy information that was particularly useful for some personal research I started a while ago to collect references and raw data for a book that is still on the initial stages of evolving from an idea to a more structured work related to "The Internet of Things" (obviously the first idea that got discarded was to call the book "TITS").
Anyway, one of the topics that really caught my attention was an analysis about from where we should expect the next billion of users. One of the panelists made the comment that the majority of the users will not come from the industrialized or developed world, where penetration of Internet services has been high and constantly growing for the past 20 years.
It won't come from Africa either, where there is a huge potential for growth but many issues, particularly with infrastructure and an abstract view of "return of investment" driving growth. Yes China, India, and south Asia continue to be potential areas with large populations that could drive growth, but also have many issues that will condition how fast users are added in this region.
Then what is left among other areas that has the potential to contribute new users ?


While Latin America may not have the same population density as other regions and hardly by itself has enough people to contribute 1 billion new users, many argue that it has the higher potential for growth given that penetration of telecommunication services in a comparative basis is still low, and despite some issues here and there the economies kept growing, and the region had somehow a period of political stability for several years.
Without digging too much for data into the numerous and never ending reports from International Organizations, NGO's, Think Tanks, etc, etc, which can get you dizzy with numbers, I have to say that I generally agree with this statement, Latin America has a big potential for Internet growth.
But I'm a geek !!! so I need data, facts, and if in a graphic format, much better ... then I found a great resource from the abominable king of search or world domination new evil (aka Google, some people are starting to refer to Larry and Sergey as Pinky and the Brain and their quest to take over the world, who is who is up to you).
If you have not seen it yet, the tool from Google is the Public Data Explorer, I found that one of the available datasets is the number of Internet Users as part of a larger dataset of World Development Indicators from The World Bank. The actual data source is from the International Telecommunication Union, World Telecommunication Development Report and database.
Then using this dataset on the Public Data Explorer I first created a graph showing the growth of Internet users for over a period of almost twenty years starting in 1990 for a selected group of developed countries. 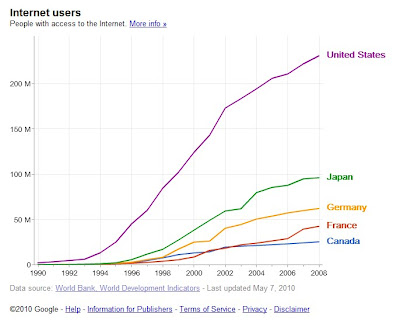 On the graph is easy to notice that from the early nineties when Internet left academia and have an explosive growth the curves show an exponential trend until around 2002 when the switched to more like a logarithmic trend or slightly linear trend. In the United States is clear that besides some rural or isolated areas, there has been an incredible penetration of services and the market has reached some level of maturity and saturation.
Now lets look at a selected group of countries from Latin America. 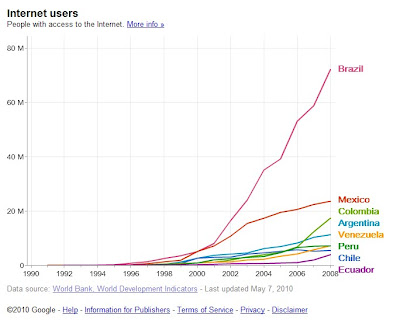 I was expecting to see a graph where Brazil had a predominant lead given its large population (~192M), but it really surprised me to see Mexico that has about half of Brazil's number (~106M) and on top of that seeing that the curve also switched from exponential and growth seems to have also reached some plateau. It makes me wonder if the actual data is correct and complete.
Anyway, as you can see from the graph there are several countries that still show exponential growth, but as Mexico others seem also to be slowing down like Peru, Chile, Argentina, and probably Venezuela. I didn't take the time yet to analyze telecom services penetration statistics and other statistics but I still believe that there is still there huge potential for growth. Then, what's going on ? Are there any particular roadblocks that are impeding growth ?
I didn't do much research yet but based on past experiences and some indicators it is clear for me that the lack of clear regulations and a real competitive market are hurting a lot. A common denominator in several Latin American countries is the monopolistic behavior of the big telcos, probably limited capital investment in infrastructure, slow rate of adoption and regulation that facilitates e-commerce, but the one that hurts the most is the lack of a long term plan based on a strategy that takes Internet as one of the fundamental resources to drive development and innovation across the board.
Perhaps it is time to take a closer look or ask Brazil what are they doing ?
After all I was just looking for this graph ... 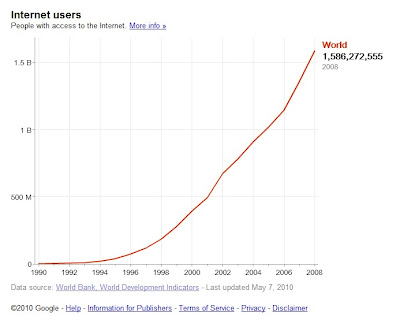 Anyway, if you are interested in reading one of the many reports that provide this type of information here is a recent one from Development Sector of the ITU (ITU-D), Measuring the Information Society, 2010, abstract:
"The latest edition of Measuring the Information Society features the new ITU ICT Development Index (IDI) and the ICT Price Basket - two benchmarking tools to measure the Information Society. The IDI captures the level of advancement of ICTs in 159 countries worldwide and compares progress made between 2002 and 2008. It also measures the global digital divide and examines how it has developed in recent years. The report also features the latest ICT Price Basket, which combines 2009 fixed telephone, mobile cellular and fixed broadband tariffs for 161 economies into one measure and compares these across countries, and over time. The analytical report is complemented by a series of statistical tables providing country-level data for all indicators included in the Index."
Cheers
Jorge